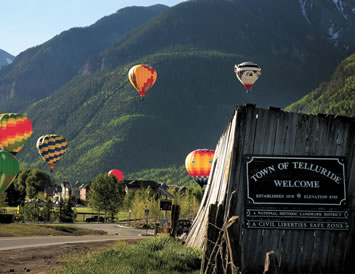 Telluride is a beautiful mountain town, tucked in a remote corner of southwest Colorado. Today, Telluride is known as world class ski resort, attracting an array of wealthy second homeowners and ski bums alike. Conde Nast Readers voted Telluride the #1 Ski Resort in North America in 2012, 2013 and 2014. However, things weren’t always this way.

If you look back at the last 150 years, you will discover a town that is brimming with colorful history, diverse culture, action packed adventure and majestic alpine beauty. Modern day history starts with the Ute Indians who called the valley home for hundreds, if not thousands of years, and was soon replaced with an unbridled mining boom in the late 1800’s that fueled intense growth, immense wealth and some wild debauchery. The heady mining days were followed by a huge slump, with Telluride remaining almost a ghost town until the development of the Telluride Ski Resort began in the 1970’s.

You might have heard some of the more well known facts about Telluride. Butch Cassidy robbed his first bank here, and the world’s first alternating current power plant nearby gave Telluride the first street lights before any other place on the planet.

However, there are also some lesser known facts about our little mountain town that you will no doubt find no less interesting.

Below I have included a list of the 10 most well known facts, as well as 10 lesser known facts about beautiful Telluride, Colorado. Test your knowledge by seeing how many of these facts you were aware of!